One month in, and I’m embarrassed to say that time is still proving quite the little enigma. Since my last post discussing ‘ahora’ and ‘ahorita’, ‘un rato’, ‘un ratito’ and ‘ya’ have all been added to the equation, meaning that despite learning more Spanish vocabulary, discussing short term plans is in fact increasingly impossible! So ‘un rato’ is supposedly a short while and ‘un ratito’ a shorter while. And ‘ya’ is the closest thing to British right now, although it technically translates as ‘already’. Yep. What the…?! And this is a hurdle I face at least twice a day. It’s just something I never even thought about at home. “Lunch will be ready at 2.” “Ready to leave in 5 minutes?” “See you in 10.” It’s never vague. I try to stick to using this method of asserting specific times but I think it makes me seem very strange: why is this girl so moronically obsessed with exact timings?!

At least I know what time I need to be at work and what time to leave: a schedule, hurrah! What a relief to know where I’m supposed to be and when! I am working in a school and orphanage with the youngest class of six-year-olds. And while the debate in anthropology between cultural relativism and cultural universalism rolls on seemingly for ever more, one thing is undeniable: children are charming beyond words, everywhere. The adorability of the children is just one of many similarities between the school in Mexico and schools in the UK. The children are impeccably turned out upon arrival and leave grubby from head to toe; they’re eager to help and even more eager to please; they’re usually happier scrabbling around on the floor than in their seats; the girls have pretty bows in their hair and the boys are more inclined to push and shove; music lessons inevitably turn into a completely uncontrollable riot; and the classroom is frequently filled with the waft of little bottoms.

Despite my appalling lack of Spanish, I’ve found that being armed with an open pencil case has an international language of its own, which has absolutely saved my bacon!

In English: the teacher asks for words that rhyme with the children’s names, only for a little girl to reply to “what rhymes with Kevin?” with “PEANUT!” No, Camila, peanut does not rhyme with Kevin!

Outside the classroom, I’m essentially an overgrown toy to play with, and can most often be found being tickled and poked with jabby little fingers, or yanked about along with cries of “¡es mía!” “¡no es mía!” I’d be lying if I said I minded. 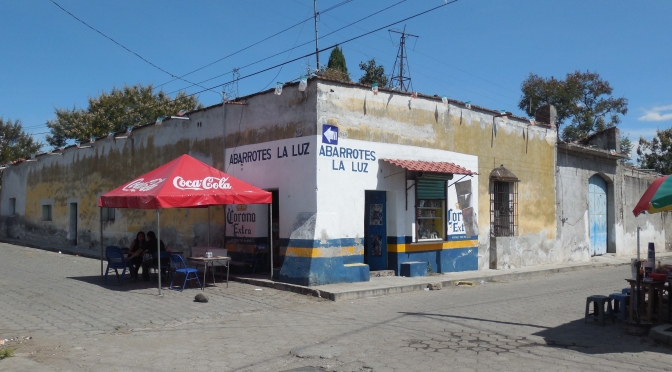 I think it’s fair to say that I was pretty blasé about coming to Mexico. Not because I didn’t have any feelings about it, but because I made a conscious decision to suppress them. I was adamant that I wanted to come with an open mind and to minimise any preconceived ideas and expectations. One thing I was particularly unsure about was where Mexico lay conceptually in the continent of ‘America’. I’d always thought of Mexico as South America, but it’s actually geographically north of Central America, and is a member of the North American Free Trade Agreement – so did it technically count as North America? And what would it be like?

In all honesty, I had assumed Mexico to be far more US-influenced and Western than it is. Of course, there are coastal tourist hotspots that are full of North Americans, but residing in the ‘cultural and religious capital’ of Puebla as I do, European culture especially is largely unknown and irrelevant to most people here. From an anthropological point of view the Latin American culture is fantastic for me, but in terms of culture shock: it’s BIG! I spoke in my post ‘Participant Observation’ about my first impressions, but the food, climate and people are things that any tourist can learn about Mexico. Living with a local family allows me to experience real Mexican life, and the culture shock comes largely from the ‘comfortable chaos’ that is so characteristic of life here.

One thing that I learned about pretty quickly was the concept of time, or more accurately, lack of. When it comes to plans, schedules and organisation, time just doesn’t seem to be a consideration! I had learned that the Spanish for ‘now’ is ‘ahora’. In England, now means, err, now. And if you say now you mean now. Simple, surely? No no, in Mexico ahora is more like ‘maybe now but actually more likely at some unspecified time in the future’. If you mean right now, it’s ‘ahorita’. “Ok, got it” I thought to myself. In a couple of weeks, however, as I grew increasingly bewildered by my constant readiness and waiting, I realised that even ‘ahorita’ isn’t really right now either, but more like ‘slightly closer to now than ahora’. It’s funny, and confusing, but this is the Mexican way, and it certainly isn’t for those of a neurotic disposition!

If you think the Mexican notion of time would make you nervous, it’s probably best that you don’t read on: the traffic in Puebla is riotous at best and terrifying at worst. If you’re taking the bus, just try not to look out of the window. On my tenth day my taxi crashed with another car (don’t worry mum, I’m fine!) and full-on fisticuffs ensued between my taxi driver and the other driver and passenger involved.  A few days later, I was on a bus when another bus flew past and smashed the wing mirror. My friend Juliana who was sat next to me had glass in her lap. You ain’t seen potholes ’til you’ve been to Mexico. There are speed bumps at random intervals on the motorways. Most of the cars on the roads look like they haven’t have passed an MOT in the last twenty years. Seat belts aren’t compulsory for the back seats in Puebla, and there doesn’t seem to be a limit to the number of passengers any given car can carry. The list goes on, you get the idea.

Despite all this, however, getting the bus is worth the fear for the pure entertainment. Bus drivers are blessed with freedom of expression and you just never know what kind of experience you’re going to get: Mr Horn-Happy was my least favourite but I really warmed to the proper MexiLAD who likes to play Robbie Williams and has smothered his windows in Playboy stickers. One day a whole band got on the bus, the harpist parked himself next to me and they played a jolly little tune. The drivers tip a scraggly old guy for hopping on the bus to spray the aisles with air freshener and give the dashboard a quick wipe. Being six inches taller than the average Mexican woman, I can’t say the seats are spacious, but I use my hip to knee length advantage to wedge myself in and reduce the frequency with which my bum lifts off the seat. Sorted.

The chaos is fun: you’d honestly have to be the most miserly of gits not to have a good time here, it would be such hard work NOT to get swept up in the sunshine spirit and totally infectious zest for life. There’s no such thing as a party animal, it’s just a given. So what’s there to do but party on?!

From Sussex to Puebla, a culture mash of English and Mexican